nose to tail eating: a kind of british cooking 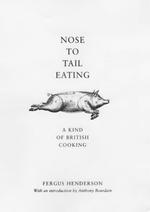 Fergus Henderson caused something of a sensation when he opened his restaurant St John in London in 1995. Set in a former smokehouse near Smithfield meat market, its striking, high-ceilinged white interior provides a dramatic setting for food of dazzling boldness and simplicity. As signalled by the restaurant's logo of a pig (reproduced on the cover of Nose to Tail Eating) and appropriately given the location, at St John the emphasis is firmly on meat. And not the noisettes, fillets, magrets and so forth of standard restaurant portion-control, all piled up into little towers in the middle of the plate: Henderson serves up the inner organs of beasts and fowls in big, exhilarating dishes that combine high sophistication with peasant roughness. Nose to Tail Eating is a collection of these recipes, celebrating, as the title implies, the thrifty rural British traditions of making delicious virtue out of using every part of the animal.

Henderson's wonderful signature dish, Roast Bone Marrow and Parsley Salad, is among the starters, along with Grilled, Marinated Calf's Heart and the gruesome-sounding but apparently delicious Rolled Pig's Spleen. He is a great advocate of salting and brining and tends to use saturated animals fats (duck, goose, lard) in quantities that would make a dietician blench. But when the results are dishes of the calibre of Brined Pork Belly, Roasted, Lamb's Tongues, Turnips, Bacon and Salted Duck's Legs, Green Beans, and Cornmeal Dumplings (trust me, they are astounding), who cares? Fish at St John avoids the usual fare--no monkfish or red mullet here; instead herring roes, salt cod, eel, brill and skate. Vegetables are mashed (swede, celeriac) or roasted (pumpkin, tomatoes) and he dares to serve boiled brussels sprouts. The puddings (not desserts) are a starry dream of school dinners: Treacle Tart, St John's Eccles Cakes and a "very nearly perfect" Chocolate Ice Cream. Not perhaps for the faint of heart, but for the adventurous an exciting feast of new and rediscovered flavours and textures. --Robin Davidson