delia's how to cook book three 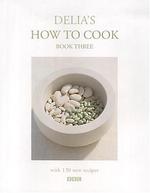 This will set pans clashing by the millions. Delia Smith's eagerly awaited How to Cook Book Three concludes her exploration of cooking techniques and ingredients in the reliable manner that has made her the queen of domestic cookery instructors. Compared with the knockabout music-hall antics of some of her fellow presenters, she has all the charisma of an Open University lecturer--but this sobriety, of course, is one of the reasons for her success. She remains resolutely in the kitchen, never distracted from her ongoing project of helping readers and viewers prepare interesting and wholesome food.

An exhaustive introductory chapter on equipping a kitchen (rule: don't skimp, but don't buy anything on impulse that you don't really need) is followed by a more personal one on Gadgets That Work (and a few that don't--step forward slow cookers and sandwich toasters). The recipe chapters encompass some wonderful traditional dishes as Delia investigates the cooking of pulses, preserves, patés and starters, while including less familiar flavours from the Far East. In writing this final volume she has taken advantage of the Internet to get closer to the community of her viewers and readers, gathering their opinions on what they would like to see covered. The two chapters that have emerged from this research, on low-fat cooking and entertaining, form the highlights of a book which, like its predecessors, is self-recommending and--it goes without saying--beautifully illustrated. --Robin Davidson