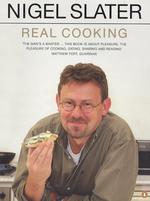 Nigel Slater is the god of sticky things. He loves bones you can gnaw, the crispy bits from the bottom of the roasting pan, squishy things to eat on crusty bread with juices dribbling down your chin. Unctuousness. This is the man who made greed sexy. His cooking is determinedly domestic, to be consumed alone, or as an intimate supper with a loved one (in Slater's case, it seems, often the cat), occasionally rising to the heights of an informal dinner party. Within these self-imposed bounds, he's unbeatable. In Real Cooking he continues the campaign he began with Real Food, the essence of which is that a baked potato can, if prepared with love and attention, be as satisfying as any more elaborate confection. Real Cooking represents something of a broadening of scope, though, with the emphasis firmly turned to the cooking process:

Real cooking is about making ourselves something to eat that involves a bit of simple roasting, grilling or frying. Nothing complicated. Nothing that is not within the grasp of a novice cook. But it is cooking, rather than opening a packet or a tin.

So he has put together a wide-ranging collection of straightforward but unfailingly seductive recipes that anyone could manage, set about with the familiar reassuring, no-nonsense Slater commentary. He makes everything sound delicious. Where to start in illustrating this? At random: "Grilled Mackerel with Sherry Vinegar", "Creamed Oyster Toasts", "Herbed Roast Chicken" (with wonderful before and after photographs), "Pasta with Spicy Sausage and Mustard", "Roast Spiced Aubergines", "Lemon Surprise Pudding". The great thing about this book is that it's just the thing to give to someone who lacks confidence in the kitchen; but it's also a terrifically handy compendium for a cook looking for simple but tasty ideas. --Robin Davidson